God almighty, talk about an early start! I arrive at the Piazza at just after 7.15 in the morning to find Len all alone and then 5 minutes later Stewart arrives. 7.30 arrives and as they stub out their fags and start their engines (bleedin’ fancy push button starts – maybe there’s something to be said for vespas after all) I’m kicking the Lambretta into life; and kicking, and kicking and ahhhh there we go, and still no coffee!!

As the sky continues to threaten rain I assure my colleagues that the weather will hold, of course, no sooner are the words escaping my lips but it starts to gently rain; but only gently.

We meet up with Wilstead Dave the other side of, er, well, Wilstead and before we know it we are halfway to St. Albans to meet up the SAS crowd for 8.30am, picking John up at Clophill on the way. Of course, Wilstead Dave forgot to tell myself and Len that John was only following us until his turn off for work, we thought that we had lost one until he caught up with us halfway back to Bedford looking for him. Ah well, all adds to the craic!

So, onwards and upwards and before we know it, we’re pulling into St. Alban’s kicking off our gear and trying to help a bloke who’s rear hub is coming off the back of his vespa! 20 minutes later, and after a quick Mc Donalds from across the road, (no hot drinks today!!), we are setting off for London and the Great London Ride Out, my first and a good test for my Lambretta in preparation for the Isle of Wight in August!

The ride to Hyde Park was uneventful other than the fact that we ended up in Regent’s Park, a fact that confused us until someone informed us that the venue had been changed due to a fun run. Blinking glad I was with the group that knew about it!
After we had parked up it was time to have a little look about at some of the other scooters that had turned up including a gorgeous model d and a lovely series 1 with just about every rare embellisher going. Bootiful as Del Boy would say. I have since been reliably informed that the lady that turned up on the Model d is none other than Christine Jackson who used to race scooters in the 60’s!

Now at this point, I was gagging for a coffee but it was Wilstead Dave to the rescue who sussed where to get one, as it happened Stuart was already in the queue buying me one, God bless him! Once everyone was tanked up with coffee, and a brief excursion to the bathroom, where there were some strange goings on that Wilstead Dave has said simply “Don’t ask”, we headed back to the scooters and before we knew it a TV crew from Men & Motors were interviewing us! It remains to be seen if we actually get on the telly though.

Soon thereafter its on the scooters and several hundred Lambrettas, Vespas and even a few autos are making their way slowly through London. It’s a site to behold that’s for sure. You ever watch a flock of swallows or starlings the way they all turn at pretty much the same time? Well it was kind of like that but with added noise, mirrors, horns and the smell of two stroke.
The marshalls were great and tried to keep everyone pretty much together by blocking junctions to help the flow, much to the annoyance of some in cars. But hell, why would they be in such a rush anyway, it was a Sunday in London, they’re hardly late for work now are they??

I will admit to being a bit jealous of the autos though, I bet they didn’t have a problem with their hand going numb with all the gear changing as we struggled through London and finally as we reach the outskirts, the dual carriageway and speeds in excess of 30mph, well, safely anyway.

Leaving the outskirts of London behind and travelling along the A127 most people opened up their scoots and the groups became more spread out so that everyone could set their own pace. This was a good chance to give that scooter a good belting and see what it was capable of, or to just tootle along taking in the fact that here you were with 300 or so plus other scooters just heading for Southend! Personally I did a bit of both along with Mark on his T5 (with newly set up mirrors) but not wanting to give the old girl too much welly yet as i hadnt long overhauled the top end.

Within 30miles, and as i was thinking that we had passed it, we suddenly came upon the Fortune of War where Tom & Wendy said that we would be stopping to meet a few more people. I managed to squeeze the scooter into a space down the street. I would estimate there were 300 or so parked round this pub and spilling into the McDonalds across the road.
It was a good time to stop to give the ass a rest, meet up with the group again and grab a pint. Mind you, the fact that there were a couple of hundred people looking to be served at the bar and only 2 staff didn’t inspire a lot of confidence and i think annoyed more than a few people, making it a shorter stop than i think it could have been. Still, i downed my pint and it was time for the final leg to Southend.

By now we were within spitting distance of the sea, ok, it was nearly another 10 miles but you get the idea, you could nearly smell it through the 2 stroke. As we went up the seafront passing all the scooters parked in the middle of the carraigeway we spotted the ideal parking spot on the pavement. The fact that it was near a pub and a chippy had nothing to do with this decision, (honest guv), and having met up with Tom, Wendy, Rachel, Paul etc it was time for fish and chips and then a wee drink to wash it all down. (And get over the sight of Paul’s whiter than white legs)
All in all, i think we all enjoyed it and though we only stayed a couple of hours, which seemed longer than some as there were some scooters that came along, rode up and down the seafront once and then turned around and went home. Speaking of which……

The route home was a lovely run which took us via Chelmsford, Harlow, Hertford, Stevenage, Hitchin and finally Bedford. This route was the best all rounder to ensure that we stayed as a group as long as possible and allowing people to turn off to their own homes without having to do too much of a final leg alone, just in case.

I cant remember where it was now but we stopped fairly early on the first leg for a breather and to top up the old fuel. Personally I didn’t think I needed any more petrol but thought I probably should. Of course I bought a bottle of Castol Super TT 2 stroke too as I didn’t have enough and it was £2 cheaper than my usual ScootR in the station. Additionally I didn’t have a measuring jug so guesstimated what I would need, unfortunately, as events will show, I would appear to have under estimated as opposed to overestimated. Anyway, once everyone was ready, and the men found a corner for a pee, we were off again.

My next stop was a bit earlier than everyone else’s.

I should mention here that I was fairly pleased at how the Lambretta had stood the pace, the only problem so far having been a side panel embellisher which had come loose and luckily was sat at my feet when we stopped in London. However, in a little village called High Ongar on the A414, I noticed my right hand headset mirrors vibrating a lot more than normal. Pulling over, a quick check revealed that one of the clamps had in fact snapped in two. Wondering what to do my hand found nothing in the toolbox to help, but luckily I had a thick bungee on the rear carrier. A bit of tying up later and I’m back on the road and waving at Tom who had kindly turned around when he noticed the group was suddenly one down. (I had been at the back when it happened). As Tom was finding somewhere to turn and catch up with me, not difficult on his stage 4 tuned GP 200 which doesn’t so much go fast as looks like its low level flying, I see that others have also turned to see what was wrong. Thanks everyone!!

It’s only another few miles before our backsides need to take another well earned rest at a petrol station where conversation includes my relaying of what had happened to the mirrors and the discovery that the station had a coffee machine! As I’m sipping my coffee and it still looks like the heavens are going to open, Rachel asks me about my engine and how it pulls in 4th. Both our Series 2s are stage 4 175s and she feels that her’s doesn’t pull well. Personally I think that she’s been spoiled because today she’s actually on her other half’s scooter, her own is at home with an imola 185 that’s not run in yet. Not that I’m jealous; well, not much.

Back on the scooters and its via Stevenage for the next leg so that we can drop Lee off and somewhere about here Tom & Wendy cut off to go home too. I can practically smell home as we find Henlow and have a final stop in a layby. By now there’s only four of us left and we’re ready for home. Off we go and we’re on the home stretch when it happens. Remember I said I’d underestimated the oil? Yep, you guessed it. As I’m wondering what the new high pitched noise is from the Lambretta suddenly she splutters, dies and heat seizes on me. I’m doing a straight line skid at 50mph with a Mercedes on my ass. I think I skidded about 10 or 12 feet before I got the clutch in and coasted down hill to the next layby all alone because, again, I was at the back. Mind you after a few minutes Stewart and Len noticed and came back, Wilstead Dave had already taken his turn off for home. Typical how this would happen within 5 miles of my front door!

Anyway, as the lads had a fag and I reattached my flywheel cover which had worked loose, we let the engine cool and prayed it would start up again, which it did. Lambretta’s, you just can’t keep them down. As we wave goodbye to Stewart and get on the bypass I’m within two and a half miles of home when finally the heaven’s open and I swear I saw someone building an ark, it was that bad.

After waving goodbye to Len in Kempston I get home soaked but in one piece. What a bloody brilliant day!! 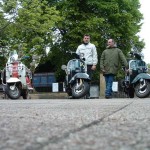 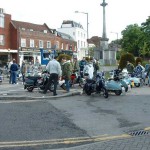 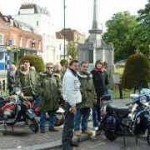 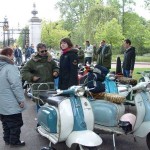 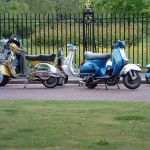 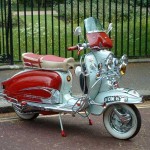 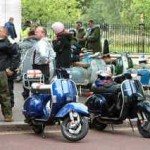 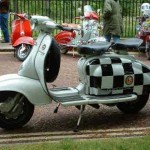 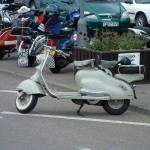 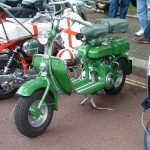 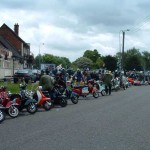 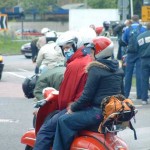 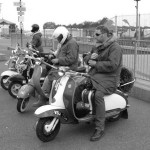 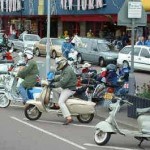 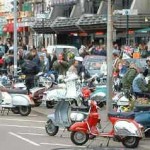