Do I even have to say it, do I? You can tell already can’t you that something happened. Fine, smart***, you’re right.

There was me all pleased with myself that I was going to be at the Piazza in plenty of time, including a quick stop for petrol and then get a brekkie at McDonalds. But noooooo, something had to happen, after all, I hadn’t heatseized for at least 3 months! So, as I kicked over the scooter for the second time the throttle cable only went and snapped didn’t it? I had barely left the front door and something went wrong!

Anyway, after letting Squirrel know so that the rest of the Pilgrims wouldn’t leave without me, I got out my spare inner cable, undid the headset and after much fiddling got the cable fitted. I did have to let Squirrel know a second time that I needed another 10 minutes on my initial estimated time of arrival though. So, once fitted and adjusted properly I arrive at the Piazza to a group of about 20 which I believe is our biggest turnout to Kettering, I even got applause for making it from a few.

It was at this point that Squirrel informs me that he had been there well over an hour, sorry, my fault. I had told him I was planning to be there at 9 (I was Guv’nor, honest!) but I think he thought we were all leaving at 9 so of course he came early. Again, my fault!

So, as soon as the fags were finished it was time to set off. For some reason Phil was pulling on his waterproof leggings despite the sunshine, so I asked if he was expecting snow or summat? Anyway, off we set, making our way to Sainsbury’s at Clapham for petrol where I managed to treat myself to a Mars Bar for my breakfast having missed out on McDonalds.

Then it was Kettering bound via the A6 and Paula Radcliffe Way where I got to the front and gave the Lammy a bit of welly to loosen up a bit. It wasn’t long however before Pete came alongside me telling me to slow down for the others, that’s a first for sure! Me going too fast. It emerged later that there were a couple that were running in their scoot.

Nearing Rushden, I came up front again and indicated to Pete I was deliberately going to go ahead for some photos, the result of which you can see here.

Now, believe it or not, Rushden now has a bypass linked to a roundabout just outside it. So there were a few of us that stopped before it awaiting the others when suddenly they arrived and went the bypass route. It was felt that this was a long way round to reach the same destination by some, a theory to be disproved by me later in the day on the return trip. So, another 15 or 20 minutes and we were arriving at Kettering Parts Fair looking for a space. Of course, there were spaces on the front of the lawn so we took pride of place as can be seen. Of course Pete had to desecrate the tranquility of the day by having to pee over the side of the balustrade, I just hope no one was below him at the time!

After a chat with some mates when we pulled up it was time to suss out the stalls indoors. My main buys I was after that day were a 3 in 1 rear carrier and a pair of cherry Doc Martens, anything else was a bonus. So off we went a hunting indoors, paying £3 on the door and getting a Beedspeed catalogue thrust into your hand.

There were the usual stalls of course, quite a few of the memorabilia ones, lots of parts ones, a good music one at the front, a few selling clothes and one selling shoes and boots. Asking the lady it transpired that there were two sets of cherry Docs in my size at £60 which at the time I thought a bit rich but was later informed by Tom that that’s a pretty reasonable price. I didn’t get them though, I’ll wait and see what they have at the Peanut Duck Fair later in the year.

As for the 3 in 1 rear carrier, well there were a few for Series 3 Lambretta’s but none for a Series 2, apparently they’re as rare as rocking horse dung, so the hunt goes on. I did notice a few items that caught my attention though, such as a Stage 4 175 AF Rayspeed cylinder, head and Asso Piston for £150 which I thought reasonable. I fleetingly thought about buying it but thought better of it, after all, after Hemsby I’m hoping to get a Mugello 185 when they get in at Cambridge Lambretta. Speaking of which, CamLam had two stalls at the parts fair, one inside where I had noticed a 3 in 1 just being bought and was relieved to hear it was for a series 3 anyway, and the other was outside.

So, outside on the field there were quite a few stalls, although not as many as the earlier Kettering Parts fair in March of this year which was packed. However, what was there this year was still good and there were still quite a few scooters for sale all in varying states of repair. For example there was a pretty good looking ochre yellow GP at £2000 but what wasn’t obvious on first glance was that it was Indian not Italian. Now to me it doesn’t matter, as long as quality is reflected in the price. There were a few other nice scooters there too including a lovely looking Vespa GS I think it was and a nice Li Series 3 but again, the market seems to think it can demand silly prices. I don’t know how many scooters got sold that day, I hope that they did and I hope that the owners are happy but personally I think prices are getting a bit silly. Still, each to their own, eh?

After a couple of looks around the outside stalls, much examining of scooters and parts there was only one thing left to do really. Yep, beer! So off we trot inside for a pint for me to find the heathens don’t have Guinness! I tell you, if it weren’t for us Irish you wouldn’t have tar on those roads to ride our scooters on and you can’t even serve me a pint of black nectar! Ah well, bitter it is (not the attitude, the drink).

After a drink, some chips and another look about all the stalls to see if there’s any last minute bargains it’s suddenly 3.30pm and time to make a move. Squirrel, Stewart, B and me head for the scooters to find only ours left, the other Pilgrims have gone on. I’m beginning to think I’m putting in too much bar time recently. We fire up the scooters and head for home at a fair pace and all’s well until we hit the roundabout this side of Rushen i.e. the “bypass”.

There had been much discussion on this route during the day and it was generally felt it was a much longer way round so it had been decided we would avoid it and go through Rushden on the homeward journey. So as I was in the lead and approaching the roundabout I indicated we would go right taking us through Rushden, however, I was half way round before Squirrel noticed and he ended up taking the bypass, with Stewart and B following on the PX. Well, now what?

I decided I might as well carry on and hoped I would meet them where the bypass converges with the road out of Rushden, and of course I did. They were waiting at the side of the road for me, hence disproving the theory of the bypass being slower, perhaps not very scientific evidence but hey it’s good enough for me.

While stopped and waiting for Stewart and B to finish their cigarettes I check my phone and there’s a message left telling me that my brother had broken down near Finmere so I had to go rescue him. Therefore the rest of my ride home was full throttle and filtering through traffic like a knife through butter and taking no prisoners. It was great!! 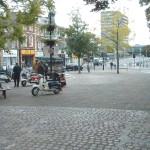 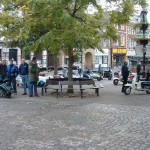 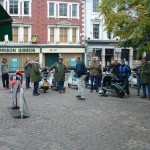 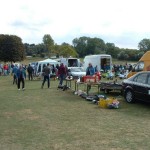 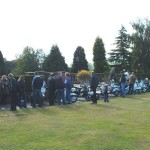 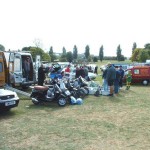 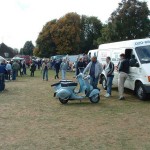 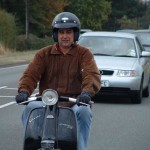 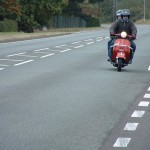 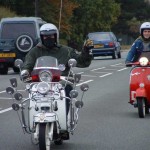 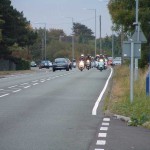 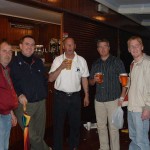 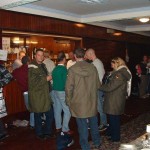