Well as the old Beatles song, A Day in the Life goes :

Woke up, fell out of bed,
Dragged a comb across my head
Found my way downstairs and drank a cup,
And looking up I noticed I was late.
Ok, it all changes there, I wasn’t late at all. I managed to get the scooter started, get the tyre pressures checked, top up with petrol, make sure i had some extra two stroke and reach the Piazza at five past nine. Not bad for me.

Of course I wasnt first down, the two Tims were already there conversing and standing beside their scooters. Tim number one with a Vespa T5 Millenium (Number 348 of only 400 if I remember correctly) and Tim number two beside his lovely new SX 200 which is set off beautifully by its number plate: SX! 200.

Within a few minutes more and more are turning up, Stuart and Bernadette on the PX200E, Chris on his PX125 that he is looking to sell, Pilgrim Dave on his GP200 and still they keep coming until there must have been about fifteen or sixteen scooters. Notably Tom turned up on Wendy’s Golden Special with a new whip aerial and Wendy had the picnic basket on the rear of the Series 2.
By the time we were organised and had some coffee it was near to 10am so we thought we should get a move on. We were lucky with weather in that there wasn’t any rain that morning.

So, after a quick stop at the petrol station at Clapham Sainsbury’s it was onto the A6 again and a fairly uneventful, if a little slow for some, ride to Kettering. I have to admit i wasn’t too bothered as I am still running in a new piston at this point so 40 – 45mph was adequate for me. Mind you, there was that roundabout the far side of Rushden were i went ahead and pulled over to try and get a picture of everyone but it didnt really work out and some thought i had taken a wrong turn!

Another ten miles (ish) and we’re pulling into Kettering. Now its at this point were I should mention that the venue for the parts fair had been changed, not a problem in itself, other than the fact no one knew where it was! Still, we ploughed on figuring if we head for the town centre we would either find it or find some other scooterists and follow them; hoping of course they too aren’t lost! After everyone being held up by the lights, except Chris, we came round a bend to find him waving “this way” so we followed him to what I would like to say was the front door and plenty of parking.

However, I can’t, it was diabolical. We had got there at 11.10 and first things first, park up. Of course, the fact that the venue is on a residential side street, lined with parked cars meant having to go up and down the length of the road to squeeze the scooters in. However, we did manage in the end and Chris got a fairly good spot near to the entrance where he taped his for sale sign to the PX125 hoping for a sale.

Inside the gate of the venue and it was packed, I don’t know what the numbers were but it didn’t feel packed through the amount of people there, it felt it because the outside of the venue was in a car park that had puddles big enough to hide a small frame Vespa! Several stalls seemed pretty good, especially so when you see that there are still some that are selling rusty bits rather than everyone being a dealer. Not that I’m against dealers but I always like a parts fair to have a bit of a flea market type feel personally. Inside the main building was only better in that it was a little more organised, other than that though, it was just too small. In short, it was functional but nowhere near as good as Wicksteed Park. On the plus side, I did manage to get a fresh cheeseburger, chips and tea for £2.70 which wouldn’t even get you a cheeseburger at the last parts fair at Wicksteed.

By now the whole place was calmer, many I suspect, had gone home for one reason or another so it was time for another sweep of the stalls now that we could get at them properly. I admit I wasn’t after anything in particular, unlike Lee who had a huge list of stuff which he was slowly making progress on. I did end up buying a front saddle for my Series 2 for £15 and a THH open face helmet for £35. Of course I then got told that Tom got his for £30 but what the hell, I already managed to get a fiver knocked off it so it was still a bargain to me.

As 2pm rolls around the word goes out that it’s time to make a move home and while we are getting ready we are treated to a couple of guys (names witheld to protect the guilty) doing wheelies on their Vespas, reminds me of when my clutch cable snapped.

The trip back to Bedford was again uneventful, if a little quicker, until we get on the bypass at Clapham where I swear the sudden sidewinds lifted me sideways by a couple of feet. Bloody wind! We were all glad to get off that little stretch.

Winding into Bedford the skies open shedding their contents so it’s a drink at the Piazza under the trees before everyone goes their separate ways.

So the verdict for the run? In a nutshell: Sedate run, shit venue, reasonable food, good mates! 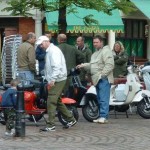 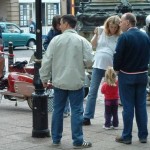 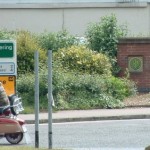 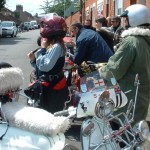 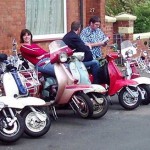 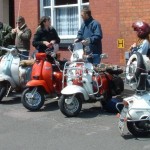 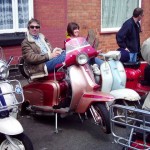