Despite the fact it’s the middle of October, we’ve been doing well for weather considering that the temperatures are nearly double what they should be for this time of year, partly I’m sure, due to the amount of two stroke in the local area

I’m sure this is part of the reason for such a good turnout on the Piazza this morning, including riders from North Herts Scooter Collective when I got there bang on 9.45am which was time to go. Still, time for one coffee surely? Of course then someone else gets a coffee and someone else. Suffice it to say, it was another 15 minutes before we left. Out of Bedford and a quick stop at Sainsbury’s petrol station and we were off, and then we weren’t as a mile into the bypass and there was a stretch of roadworks with a guided speed limit of 10mph!! It was here that Smokey Joe started to weave in and out of the cones a la “It’s a Knockout” Another 5 minutes and we were away and on our way to our destination.

After turning off to go through Rushden, we were at the square at Higham Ferrers and all was well, except for one thing, it was empty, not a scooter in sight!! Bugger, we were half an hour late! Now what?

After a quick discussion, Donegal hopped back on the scooter and rode the extra mile and a half to Irthlingborough because someone thought they heard that’s where we should be meeting. Unfortunately, we were wrong but while there he rang directory enquiries (the wife at home) and got her to see if there was a number or other information on the Diamonds website. This resulted in the name of a village 10 miles further on than Higham (Lowick) where they were provisionally planning to meet. By the time Donegal returned to the others, some of the lads from the NLVSC had arrived and one had made contact with one of the DIamonds lads who also said he thought that’s where they would be, though to be fair to him he wasn’t out to play today.

So, the choice was either back to Bedford, or crack on to Lowick, so, once the coffees and bacon butties were downed, it was on to Lowick.

While the roads to Lowick are good, there were still enough muppets on the road to make the journey, ummmmmm, “interesting”.

Arriving at Lowick we found everyone parked up outside “The Snooty Fox” though all the scooters were the same as had left Higham Ferrers and our suspicions were confirmed inside when there were no Diamonds to be found.

So, all in all, it was a good rideout but I guess we don’t know where those Diamonds were? 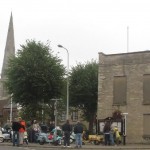 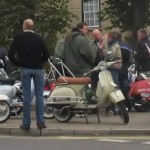 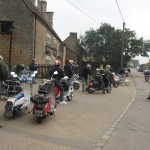 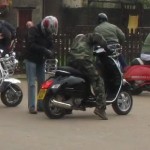 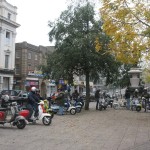 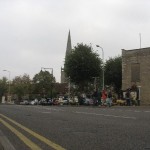