I think that this was the first non Sunday run out for the Pilgrims this year and was all organised at short notice. A big thanks to Rob for telling everyone about it!

Kinda surprised I got there at all I have to say, what with my scooter backfiring and popping all over the place, Rachel soon kept back once she noticed!

Leaving for Sandy Market for 7pm I arrived at the outskirts at only 6.30pm so thought that I would top up with petrol, quite pleased when I managed to get my super unleaded (don’t laugh) for the price of standard too
Anyway, Rob found me in Sandy after wandering up and down the high street and soon there were about 15 scooters in all. Mark got sausage and chips while we were waiting and I got a red bull seeing as I had been working nights hoping it would help me stay stimulated.

The run to the show was pretty good other than my aforementioned backfiring and I think we only made two stops on the way there. The first was unscheduled and I wondered what was going on. Suddenly everyone was getting off their scoots and putting on their waterproofs stating that “we’re heading into that black cloud over there”, to which I assured everyone that it won’t rain. They didn’t believe me but at the next stop it’s strange how many people I noticed taking their waterproofs off again.
So, me being me, at the next stop for a pint and to meet up with the others (Lee, Tom, Wendy and Pete) I decided I would have to strip down the top end and rebuild it in 20 minutes. OK, slight exaggeration but I did manage to undo and refit the cowlings and double check the cylinder outlet nuts to ensure there wasn’t a leak there. Whatever I did it worked as it behaved much better.

Soon, it was time to go and before we knew it we were at the show being herded into the field reserved for parking up.

We made our way up to the main show, looking at (and perhaps even admiring) some of the bikes on the way. First mission was of course to find beer which we achieved with ease, second mission was to suss out the food situation and then just wander around looking at the stands and the bikes.

My god but there were some custom jobs there including the above trike with a V8 engine and a beautiful custom motorbike which won the custom category. The only bit we recognised was that it had a Honda engine, and that’s only because we could see the logo on the side.

There was even a 1960 Messerschmitt in lovely condition and several Norton’s, Triumphs and others I had never heard of. The rest of the time we generally wandered about, I know that Lee managed to get a bargain with his green jumper, which I won’t divulge what he said about that! Mark and Lisa won an auction for a bottle of Teachers which I wouldn’t have thought he could have room for due to the sausage and chips before getting there and then the massive hog burger as he was looking around! Stuart and Bernadette also managed to get a pair of German Parkas for £30 too.
Daaaaad! We wan’t one!!!!

So, time to leave. Off we went and all was fine until we hit the first crossroads and everyone went different ways! So I took pot luck and followed Rachel and Bob after waiting for her scooter to start after it had stalled and then away we went.

It was a good run all the way to Sandy were we all pulled over, after meeting up with the lads that had gone straight at the crossroads; think it was a shortcut. Anyway, from Sandy everyone pretty much went different directions to home and as I said I was heading back via the Bedford bypass I got to lead the group of 4, which is fine. I’m not normally one for leading the pack but thought it was ok, until I realised how dark it was getting and just how badly I really need to sort out some spotlights so I can see where I’m going! Still it made for a good ride back and I waved off Pilgrim Dave at the outskirts of Bedford and made it home in one piece after yet another good rideout! 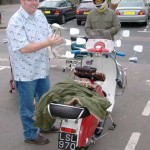 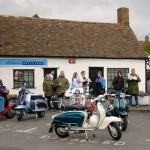 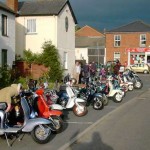 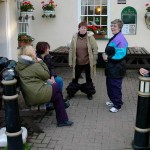 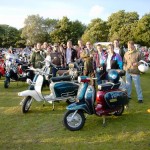 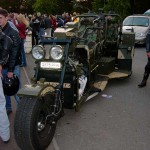 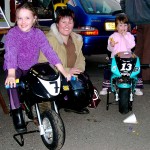