I met a man with seven…. ok, I didn’t really but we were going to a pub called The Seven Wives.
Before that though I had to go meet the Pilgrim guys and gals at the Piazza for the usual Sunday morning meet, so off I went after leaving the wife with her parents and the kids.

On arriving at the Piazza for the first Pilgrims ride out of the year I met up with several of the club including Tom, Mark, Quincy and others, with Stewart and B arriving soon after me. There was literally time for a coffee and a hot baguette (ooooh how continental!) and it was 12.30. Time to go!

Only one problem though, no one knew exactly where we were going. however, I was planning to basically head for Cambridge and follow the first sign to St. Ives that we came across. This was deemed to be a reasonable plan and so off we went.

The trip to St. Ives was fairly straightforward, there was the usual eejits on the A1 stretch and for some reason Quincy tried to lead everyone to Tesco’s at the roundabout near Eaton Socon. I wouldn’t mind but he works for Sainsbury’s! Once we got back on the right track it was just a matter of keeping an eye out for the St. Ives sign which we soon found and followed, leading us round behind and past Papworth.

Another few miles on and we were in the middle of St. Ives and wondering where the hell the pub was and then myself, Mark, Stewart and B got separated when I stopped to ogle at some young totty. Oooops! I mean when I stopped to ask two young ladies if they knew where the pub was. They didn’t though, bugger! So we double back and I spot what I think is a copper and risked it.

In hindsight, I’m not sure that it was a good idea; a group of scooterists asking directions to a pub, but he got us there, only to find Tom, Quincy and the others had already found it. Ah well, what’s important is that we all got there safe and sound other than Mark’s foxtail making a getaway at some point in the journey.

Once parked up it was great to see the lads from the local clubs, after all they come over to Bedford often enough. Time for a pint and a chat and maybe even another pint. During the conversation Tom mentioned that Wendy was coming over too and she brought a little friend, their new dog which is a lovely well behaved Alsatian or German Shepherd, I can’t really tell the difference.

It wasn’t long before people were having to go due to work or other reasons but there was one person who took a different mode of transport home. Wasn’t there? Eh? You know who you are don’t you? I wont tell though, your secrets safe.

Ooooops, how did those pictures get there?????

It wasn’t long before the rest of us were leaving for home and again a big thanks to the guys from St. Ives. 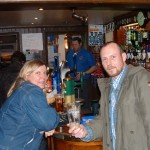 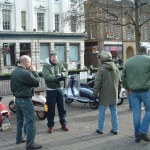 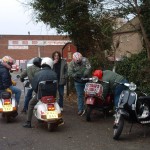 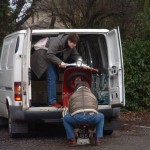 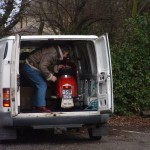