Last local parts fair and custom show of the season and at 9.15am on a windy Sunday morning I’m off to the Piazza to meet the crowd of others that are probably waiting. Passing a cashpoint on the way and having topped up with petrol I get over the town bridge and spot Mojo having a MacDonalds on the corner. However, his is the only scooter I see on the Piazza so I pull over beside it as he walks over. Turns out that Pete would be along soon so I take a leaf from Mojo’s book and grab a bite to eat. As Im tucking in to a MacShite burger Pete arrives and immediately lights up as i finish my “meal”.

As it’s 9.30 and everyone else is probably going in their cars or not able to go, we decide to head off promptly. We’ve already decided to go via Junction 14 of the M1 seeing as Pete’s already told us there are literally chunks of trees and bushes in the road and means we don’t have to go via Brogborough Hill where all the crap comes off the lorries.

So, heading past Biddenham out of Bedford on the A428, past Bromham to the roundabout to make a left on the A422 towards Stagsden and beyond. However, with the wind taking its toll on speed I’m lagging behind about 30 yards, with Pete in front of me and Mojo in the lead. As we approach said roundabout, there’s a big black Range Rover approaching from the right about to enter it. There’s plenty of room for Mojo to make the turn but the Range Rover is close enough that both Pete and I have to give way. Not a problem as such except the cunt in the Range Rover literally crawls across the roundabout in front of us. Pillock! Pete’s off with me closely following and Pete gets past him almost immediately but then theres a car coming so my opportunity’s gone. I go for it a hundred yards later, as he’s not making any great speed at all. Out I go and pulling alongside his bonnet when he decides to match my speed! I drop back a couple of feet so I’m directly alongside his window and look directly at him, glaringly! I don’t think he was expecting that. I give the scooter some beans again and now there’s a car coming towards me so I look over my shoulder again at the twat in the Range Rover and pull in sharply which makes him back off.

I manage to catch up with Pete and Mojo before we hit another straight where the Range Rover overtakes all three of us and he’s on his merry way. It’s an otherwise uneventful ride until we get across Junction 14 into Milton Keynes proper. Just after we pass a car which has run off a roundabout and into a lampost, Pete comes alongside pointing at my scooter warning me about something, I do a quick cheack as Im riding and see nothing amiss, scooter feels ok so what’s he on about? I pull up behind him and Mojo, who he’s waved down to wait on me. I still can’t see anything until I get off the scooter and notice that my right side panel was only held on by the panel handle. Pete says it was flapping in the wind!!

One bodge later and we delve further into the concrete jungle that is Milton Keynes and before we know it, we’re lost. We’re fairly sure we know the area but …… Anyway, after I lead everyone through a residential estate, slippy leaves on every bleeding roundabout, Mojo gets us back on the main carraigeway and something clicks as he leads us straight to Peanut Duck

I do enjoy loads of scooters about the place, but we were sadly dissappointed, asides from 2 or 3 from the Tin Soldiers SC ours were the only scooters there as we pulled up!! Ah well.
Soon as we’re parked up it becomes evident that there’s a huge bloody queue to get in so we decide to look about outside where there were a few good stalls with secondhand stuff, proper parts fair stalls. One guy had boxes of gearboxes, old panels for all sorts of Lambrettas and Vespas, speedos, seats etc. Fair prices too, I mean £5 for a T5 seat, a little tatty but nothing that wouldn’t be easily rectified.

We decide to queue for a cuppa and a burger while the queue to get in will hopefully shorten and by the time we’re served, Claire has come out with armbands and taking the money for admissions. There’s a bit of ingenuity for you, and by the time we’ve eaten, the queues pretty much gone

Soon as we get inside we head for the main hall to look for the bargains and I have to say that this is one of the best Peanut Duck’s I’ve been to from a bargain point of view! A Series 2 running for £700, some lovely alloy trick bits on Scooterloopy John’s stall, lots of shiny bits, some nice deals on Rich Presley’s stall, Buzzsolomoto’s lovely reasonably priced and ready to use panels for Series I, II’s and III’s and the list goes on. Mind you the only thing Pete actually needed was a new chrome tax disc holder, which he got for £6, though only 5 minute’s later I pointed out one for a fiver. Doh!!

We head out of the main hall and upstairs to the other hall, which is in fact essentially a balcony, still there were several good stalls, including a guy selling some very reasonably priced doc’s and a lad selling some jeans, course, I get mine from Tesco’s so he couldn’t beat my £3 a pair price . Also met fibreglass john upstairs and had a good chat about LeJoG and proper runs
It’s 11.50 and Im thinking it must be time to have a swift pint, so we head back down to the bar where the shutters are up and the barmail is putting out ashtrays on the bar, right under the “please don’t smoke at the bar” signs. It’s 11.55 when I ask for a pint but she says it’s not open ’til midday. My reply stating that it’s already midday “Irish Time” gets a smile a nod and first in the queue to buy mine, Pete’s and Mojo’s beer
After a couple of light refreshments, ’twas time to think about going but I really wanted to have a look around the custom show so told Mojo and Pete to crack on and I’ll catch them up.
The custom show certainly had some absolutely stunning stuff, some was the same as I’d seen before, but there were some new and well done scooters including a lovely cutdown done by none other than our own local, Mr. English.

While the custom show was good, I was a little surprised at the stalls that were also in there, it did mean that the scooters seemed a bit squeezed in, which was a shame but I guess Claire was trying to make the best of the facilities available to her. Fair play to her though for organising it all, without her, there would be a gap in the scene which would probably put money first and scooterists later.

I had a great run home just as it was getting dark and decided to chance Junction 13 and Brogborough Hill, as it turns out, traffic was crap, but I managed to filter past pretty much everything all the way home to Bedford so made damn good time. Before I knew it I was home in the warm and having a tinnie 🙂

It was good to see many old faces that I hadn’t seen for varying lengths of time including; AFAndy, Timbo, Darren, Ben, Golden Graham, Boxer, Justin, Wrighty, Steve, Bub, the Belgian, Mark Shovell, Dobbin as well as Wellerchap, Viceroy, Gwilym and Corrado of LeJoG fame 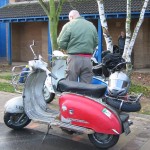 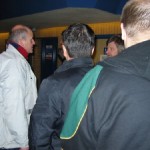 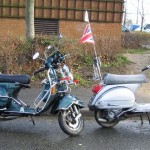 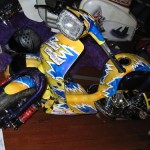 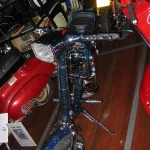 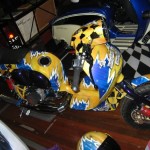 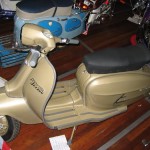 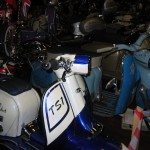 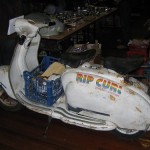 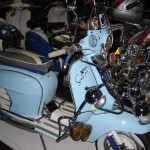 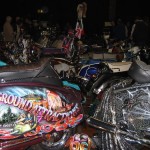 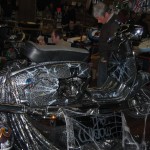 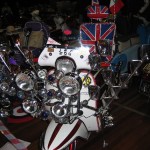 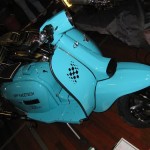 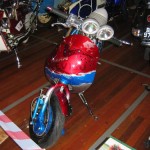 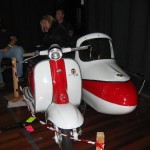 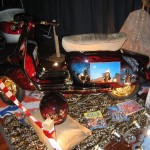 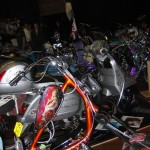 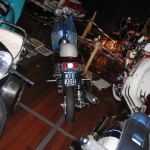