9am, 9am, 9am….. I have to remember it’s a 9am start from the market square, not 9.30 like i thought the time my throttle cable snapped! I fully expected something to happen when I kicked over the engine but it fired into life first time, not bad considering she’d sat for a week in this crap weather.

On saying that, it was quite a reasonable Sunday morning and when I pulled in at the Piazza there was a crowd there already including Stewart, B (don’t call her Bernie for God’s sake!), Smokey Joe, Chalky and a few others. Of course, me being so organised, I had to nip up the road for some cash so I could spend lots at the parts fair and when I came back to the Piazza I was asked what time we were supposed to be leaving, to which i answered “10 minutes ago” with a smile. So much putting out of fags and donning of helmets was the order of the day and off we went.

Our journey took us to Flitwick were we were originally going to be meeting Boxer but it turned out from B that he was going to van it to the fair (Personally I think he’s getting too comfortable in vans after Hemsby!). On the other side of the bridge in Flitwick and just past Tesco we met up with Mark Woodyatt and pillion (course you know him, he’s the bloke with the musical vespa). Anyway, once Woody and pillion joined the convoy we were off again and heading for Dunstable, via Toddington.

Once at Dunstable it wasn’t too difficult to find a parking space for us lot, we just parked at the front, making sure we weren’t too close to the Aston Martin. Only because we didn’t want to embarrass the owner, parking our classy scoots next to such a representation of modern psychosocial impotence! (Christ I really need to up my medication)

Once parked, it was time to make the big decision, inside or out? We could get in the, quite large, queue to get in, or have a look at the outside stalls dotted about the car park. Most of us opted for the fresh air as the hall hadn’t long opened anyway and thought that there might be a bargain or two to be had outside.

As it turned out, there weren’t many stalls as such, however there was a guy with two scooters for sale. One was a lovely Li in white and it looked brilliant despite being a series 3 (ok, so I’m biased), I think it was going for £1600 give or take a few quid. Now beside it, was a lovely Golden Special and I mean lovely, with a price tag of about £2000, which seemed a bit of a bargain.

Mind you, turning round to head to the queue and there was another Golden Special in the back of a van, think it had a price tag of about £2500 though, and to be fair, the previous one had an Italian SX200 engine in it. So, off to the queue we go when Pete Burgess turns up and sneaks into the queue with us.

So, once we paid our fivers and we were inside it was time to have a wander round the stalls and look for the bargains, but as ever these days, there were none to be had. OK, a few stalls did have some stuff at fair prices and there was a little to be saved by shopping round but no proper bargains as such. In fact, I noticed a couple of stalls that had products dearer than what you would pay at the dealers shops!

Also noticed that our own Mr. Shirley was on the BSSO stall recruiting and informing people of scooter racing and exploits.

I personally didn’t buy anything other than a Peanut Duck patch and some tickets for a Vespa. I know, I know, but I thought I can always sell it and buy another Lambretta!

Back inside and the custom show was impressive. Quite a few scooters I’d not seen before on the scene, not that I’ve been on it very long anyway. Some of the one’s that stood out for me was the Newcastle Brown one, the Dad’s Army one, Pride and Unpredictable, which I had seen on the Isle of Wight. Lovely all.

Of course, after the initial look round it was time to find refreshement in the form of drink, so off upstairs a few of us toddled to find the bar just rolling up the shutters, lovely.

Not long after that, Big Rob, Squirrel, who had no sleep after doing a night, Scooby and Pam arrived and a round was promptly waiting for them. Funny how the stout brought Squirrel to his senses.

The rest of the day consisted of more sorties of the stalls, hoping I suppose for some of the stalls to drop their prices, but to no avail. And of course another drink. Not sure who won the Vespa but it wasn’t me 🙁 I’m not bitter though (gits).

By the time we left the weather was ok and other than an idiot in a Nissan 300ZX who thought he shared genes with Michael Schumacher it was a good and uneventful ride home. (As it happens I suspect he shared more than a few genes with The Hunchback of Notre Dame) 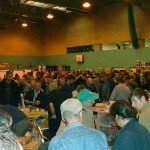 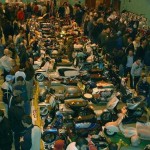 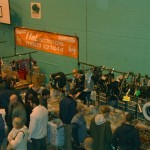 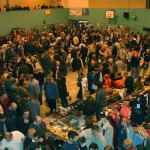 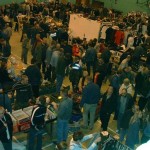 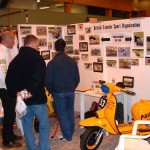 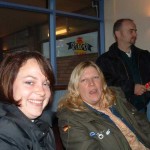 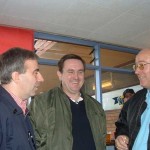 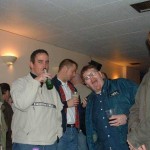 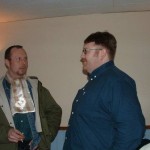 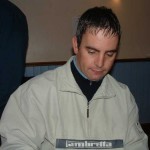 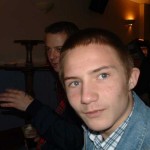 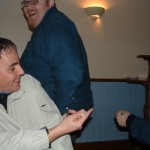 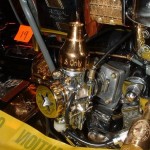 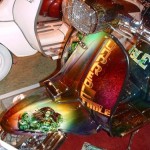 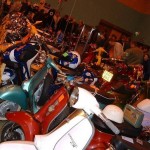 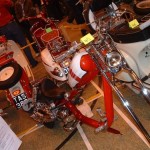 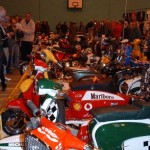 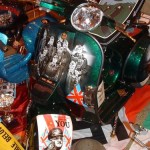