I make no excuse for the biased nature of this report. If there were a prize for nearest travelled I would win by a mile as I could push my scooter out of my garage and freewheel down the hill onto the common.

Harpenden is my home town and Classics on the Common is not only the largest event held in the town it is also one of the largest evening gathering of cars in Europe. Staggering when you think it is NEVER advertised! A year ago the event won Classic and Sports Car Magazine best event.

It first started 10 years ago and was attended by 25 cars , last year there were 1800 ! But much more importantly it was seeing the scooters 4 or 5 years ago that set something inside me tingling ! The rest they say is history !! If only i had kept that Li 150 from all those years ago.

Although I am not involved in the organisation I did pray nightly for several months for some decent weather and my prayers were answered with a warm sunny day. The scooters are organised by the SAS (St.Albans Scooters) and it must take some organising, as it appears to be the only event they do organise!! Joking aside, top marks to Kev who puts his hand in his pocket to pay for the ad in Scootering Magazine. Incidentally someone from the Luton Lambretta club claim they have been attending the longest. That sounds like a good pub debate.
I had arranged to meet Kev at 5pm in order to secure pole position along the edge of the road, our usual spot. However it was apparent from the steady flow of “classics” through the high street that things were going to happen a lot earlier. I drove past the common at 4pm to see a line of Harleys parked up in our spot! Thoughts of Brighton beach came to mind as I phoned Kev to give him the bad news. 20 minutes later I was on the common on my Lammy and was pleased to see a modded up Vespa. The guy had ridden it to work and come straight to the do. Top man. Unfortunately there were another 20 Harleys and I quickly forgot about Brighton !!! Anyway I thought I would mend some bridges and talk to a couple of the “hairy unwashed” and bugger me if they both didn’t used to have Lambrettas. Nice guys as it turns out. Over the next few hours there was a steady flow of motorbikes and just a dribble of scooters but between 6.30 and 7.30 the scoots came flowing in and by 8 we reckon there were nearly 150, well up on last year.

At 8.30 we were told to fire up and make our way through all the bikes, to a side road where a police car was waiting to give us an escort to the short but seriously ‘posey’ ride out to the Plough and Harrow. With the sound of 150 two stroke engines everybody just seemed to freeze and watch us in awe as we meandered around the motorbikes and onto the road. It was an awesome sight and even more so as we rode up the hill across the common as the road was lined three deep for several hundred yards with open- mouthed people. At the top of the hill we came back around the roundabout and en masse drove back down the way we came and onto the pub. There’s something very special in my opinion about a large group of scooters riding together and this was up there with the best. Roll on the IOW the mother of all rideouts .
I will let others comment on the pub and the live band (the same ones that played at the BBQ) but I believe they went down very well as I went back to the common to meet friends who were there with cars. When I returned at 10 there was a real buzz about the place and well played to the landlord who paid for the band and provided food.

At the end of the night, when most of the scooters had departed I spotted a real gem! A chromed panelled series 2 TV175 with a number of strategically placed spotlights Bootifull!!! Apparently it took him 4 years to build. With only a few scoots left I decided to make the long journey home….LOL

This was the best common do yet. Well organised, well marshalled and well policed and it was good to see all the different clubs in attendance. Well done to everybody for making the effort and already looking forward to next year. 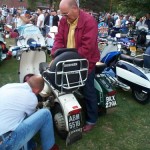 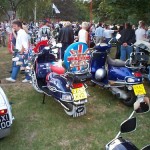 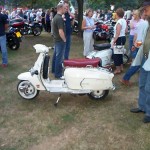 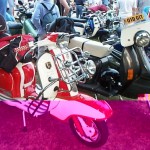 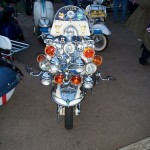 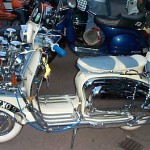