Having missed seeing everyone last week I was really looking forward to seeing everyone again down at the Piazza so off I went through Kempstons roadworks like a bat out of hell. Mind you, you have to liken a bat to a 43 year old, two wheeled, red and white, internal combustion powered vehicle with a 15 stone Irish bloke on it. As for hell? You to the maths.

Reaching the Piazza it would appear that the council have finally done something about all those bleedin’ cars that keep parking on there and put barriers up! Much more room now for our scooters, ha har! What was particularly strange was the hire van that came on somehow and unloaded a sofa?? Seriously, I thought that the council were suddenly upgrading park benches or something.

Nice to see a good turnout too, probably about 25 – 30 including a few lads over from Milton Keynes again, cheers lads. have to say, seemed strangely quiet without Big Rob and Squirrel there, only joking lads.

After much chatting, some coffee, a baguette and taking an order from Libby for a Pilgrims T-Shirt it was time to mount up and head for the pub. Pete’s scooter needed push starting (cantankerous bugger, and the scooter) still, it was easily bumped, and off we went. It was a pretty good run, past Polhill Campus, out through Great Barford and onwards toward the A1.

Something happened just as I got on the A1 and I’m still not sure what it was, but I came off the roundabout in first, quickly into second, third and then 4th and the scooter just kept pulling! I was off the clock and it just felt like it could go on forever. I was saying to Scott, who (just) overtook me on his PX that all the time it was flying like that I was just waiting for a seize! Didn’t happen though, methinks the heat seize god was busy looking elsewhere today.

At the pub there was already a crowd of about 20 from such places as St. Ives and our lot made it about 30 or 35 by the time the stragglers arrived, you know who I mean don’t you Chalky??
First order of the day was of course a drink. The pub is quite nice and not too busy, certainly not packed, mind you I’m sure that barmaid was blind and at least 3 people got served before she spotted Scott and Hannah! Also, they didn’t do bar snacks, only roast dinner and stuff; I think they lost out there, I suspect many would have had some chips or a sandwich! Still the beer was good.

Much of the rest of the afternoon included conversation around a new scooter business that’s opening up locally by someone we all know (nudge nudge, wink wink) and watching Chalky attacking Horse Chestnut trees for the kids!

There was one scooter that did particularly stand out and that was a lovely chop titled “A Tribute to Barney” Barney Rubble that is.

Some nice touches including the frame and petrol tank being covered in leather, extended front forks, reverse pull front brake (see Squirrel, it does work).

So all in all, it was a good day and going home I left the group at the Black Cat roundabout and blasted home at a good old pace loving every minute of it!! 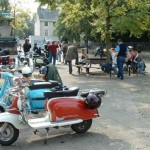 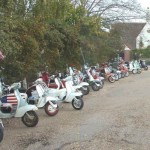 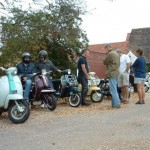 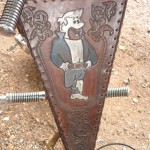 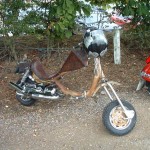