Well, it started out like any other Sunday when I set off at 10.30 to meet up at Paul Redferns house and Del Boy was already there, next stop Squirrel’s. The four of us arrived on the square at about 11am to find we were first there, other than some biker’s. We’ll have to watch that lot!

Anyway, the morning progressed as per normal with baguettes and coffee and much chat about scooters. Nice to see so many in club shirts too, especially reminiscent of the IOW; even more special was Squirrels photo album doing the rounds!! Ahh what memories (write up on way) Nearly forgot, welcome to Mark and Laura (on the left) and also nice to see Mark and Lisa (this is gonna get confusing) with the new Lambretta (on the right)

Then there was chat of a do that Big Rob had remembered over at Baldock, the Gremlin Motorcycle show organised by North Herts MAG (Motorcycle Action Group), so after much persuasion of the Mrs, off we went, about 7 of us to Baldock.Nice too to have seen quite a few scooters kitted up, obviously on the way back from Mersea, hope you had a good time lads!
On arrival, the street was filled with all manner of motorbikes; there were classic triumphs, sports bikes, scramblers, trailies, some gorgeous trikes and of course the obligatory Harley’s. Still, undeterred, Big Rob only goes and enters his scooter into the custom show right outside The White Lion Pub on the High Street! Still you gotta laugh.

So, we have a few (cough) drinks, down a burger or two, listen to the live music and generally enjoy ourselves and before we know it, it’s 5pm and the results of the custom show are being read out, when suddenly, f*ck me but Best Engineering only goes to a Mr. Rob Ferguson for Freedom!!! What a blinder! The look of shock on his face was a picture itself, all the Pilgrims cheering him on and great cheers from the crowd too as he goes up and collects his tankard and shirt. Brilliant.
So anyway, we’re still busy congratulating Rob on a job well done when Best International only gets read out, yes, you guessed it, Rob Ferguson again!!!! Unbelievable or what? Brilliant result, another tankard, another winners shirt, another great result for the Pilgrims and scooterists in general!

At this point we’re taking pictures and not even listening to who got best rat bike, best youth bike, best chopper, but everyone’s ears pricked up when suddenly the announcer says, and I quote:

“Best Bike of Show: Ah this is getting tedious now…….(long pause)……..Freedom! Rob Ferguson!”
Well, colour me pink and call me Vera! I thought Big Rob was going to have palpitations the look of shock on his face was so, well, shocked. Three trophies at a motorcycle custom show where he entered last minute, what a brilliant day for everyone.

A big thanks to all those at the North Herts MAG and everyone there, great venue, great day! 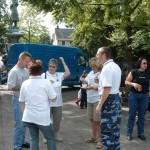 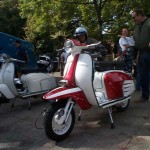 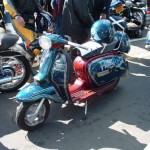 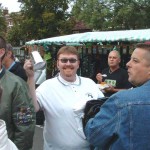 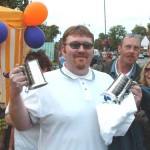 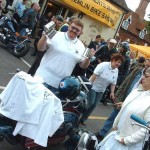 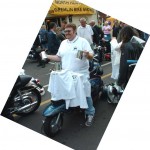