Before you all think it was me, you’re in for a surprise, it wasn’t, well, not the one I’m talking about anyway.

So, I’m round seeing GP Paul (Redfern) last night when I then go round and visit Squirrel too and we take a run out to Ron’s at Biggleswade so I can change my two single saddles to one dual seat. So by the time I’m going home from Squirrel’s on the scooter it’s starting to get dark when suddenly my throttle cable snaps and its a quick improv job to get me home. (Buggered if I had the strength to push it!) Anyway, I was up at 7am to fit the new cable and the new seat! Then I get a call at 9.15 (15 minutes before we were supposed to leave the market square) from Wendy to charge me with the task of ensuring the rabble get off on time. At this point, with 15 minutes to go, I got dressed, shaved and on my scooter!

So, arriving at the piazza, (on reserve) I inform Mark (Len), Stuart and Rob that I’m nipping to get some petrol and off we’ll go. So we did. For some reason I barely remember the ride to Sandy which was the next stop to pick up the others at the petrol station on the Black Cat roundabout. When we got there though, there were loads including Phil & Wendy, Mark & Lisa, Paul on his X9 and Rachel but not on the Imola Series 2. Of course there were others, just look at this pic!

Christ it was hot, and it was only just gone 10am as Tom & Wendy arrived too. So within 15 minutes we are on our way up the A1, take a left, a right at the roundabout, straight on and we’re past St. Neots, about 20 or so scooters looking stunning in the morning sun. Yes, even the Vespas.

At this point, everyone was pretty much staying in a group although there was a little lagging behind as some of the faster scoots pulled ahead a bit. Hell at one point I was in the lead, now that’s saying something. It wasn’t long until we hit the Little Chef near St. Ives to meet up with a couple more scooters, well spotted Alan! I didn’t see them and was wondering why you were doubling back on the roundabout.

This became an unofficial stop, at least that’s what I gathered when Tom was saying to the group that we needed to get going if we were going to keep to time, then he spotted Mark and Stewart lighting up and it became “Oh go on have a quick one”. Mind you, I think he had other things on his mind!!

No need to worry as it happened because soon we were off, Little Chef bound again to the next meeting point on the A14 where my stomach made an executive decision and wanted a big breakfast. Of course, I’m not sure that was in the plan either but me little Irish belly was gasping for some proper food. No offence to those that had bottled water and dry sandwiches from the garage across the road, but my fry up was lovely.

However, as we are sat there having just ordered breakfast, news filters through that someone is stuck a mile or so back on the dual carriageway after having suffered a heat seize! Bugger!
Of course the feeling of deja vu soon passes when I realise that I’m sat about to have breakfast so for once it’s not me!! Anyway it turns out that it’s Mark & Lisa’s Vespa T5 that’s seized and how so? Wouldn’t even kick over when cooled. There was nothing to be done but call the recovery guys and the rest of us carry on, sorry you guys. If it’s any consolation, it was a crap day. (All lies of course, it was great!)

After a hearty breakfast at the Little Chef, Rachel, Paul and I left as everyone else had gone on to meet the others at the next stop, Tom was worried that if there were people waiting, and we were late, they may think that we weren’t coming. Of course, when we arrived at the next stop it was evident that we had missed them there too! Personally I blame Rachel.

Anyway, Neil on his GP DTC21 and Mousse on his yellow T5 from Blues and Gold SC joined us here and the five of us set off for sunny Thetford. It wasn’t long before we got there, and other than a pillock who didn’t like to see me and Paul Q overtaking them, and of course the pit stop to phone up and find out if we were on the right road, it was uneventful.

On arrival at High Lodge in the park we were greeted by a right sour face, mind you that was the attendant taking the £2 entrance fee, everyone else seemed happy to see us.

There was certainly a good turn out of scooters and people from Brandon, Norwich and others we picked up on along the way. The Cambridge lot were noticeable by their absence, sorry about the boo boo in communication guys, next time we hope?

The rest of the day pretty much consisted of trying to get Alan’s scooter running again. Doctor Tom diagnosed a knackered clutch on it’s way out and after tightening up some loose wires, cleaning the jets in the carb and changing three spark plugs it still wouldn’t start. As a final act of desperation the original spark plug was put in and with the laying on of the healing hands the bugger started!! A rapturous round of applause could be heard in celebration.

Of course, there was the big moment when Tom proposed to Wendy and luckily for him she said yes. I have of course invited us all to the wedding telling them we would crash it anyway. No date set yet though, we’ll have to keep our ears close to the ground for that.
So, before long the heat was getting to many and someone uttered the magic word “alcohol”. Actually it was more of a guttural gurgle “beeer”, funny how many reacted to that in a positive way. So in groups many were off, including me, to the pub only a few miles up the road where the order of the day was Guinness at a pub called The Flintknappers. Of course, I had to ask, and the response was, and I quote, “someone that knapps flints”. I didn’t ask anymore, I took my beer and went outside where I felt there may be slightly more oxygen!

Soon of course it was 4pm and time to make a move home. It was a great ride home too, with a nice bit of cloud cover, just enough to stop the sun glaring onto us and we even had a cool touch of rain. Hell that stung when you were only wearing a t shirt too! Still it was over soon enough and the closer we got to Bedford the more people peeled off at their various junctions and I arrived home with a huge grin on my face pleased to have met so many from the other clubs, seen so many other lovely scooters and happy that on the hottest day since who knows when my scooter behaved so much better than I thought.

Roll on the Isle of Wight, Donegal Paul’s coming to get ya!! 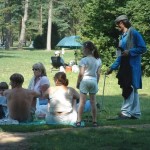 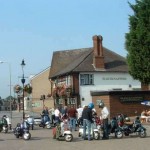 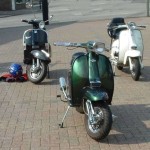 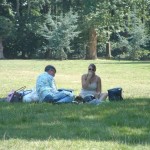 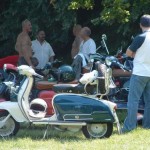 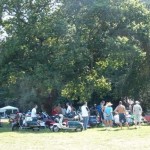 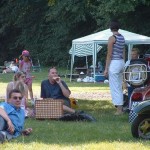 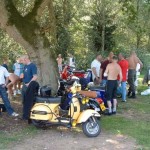 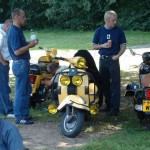 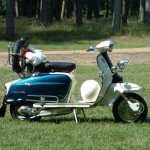