Well what can i say?

Today saw me arise as per usual, I checked everything was working, (yep, chest rising and falling as it should and breathing systems seemed to be functioning normally) so thought all in all that the day was off to a good start.

Eleven as I’m donning my parka and I get a text from Squirrel asking if I was on my way as he was already at the Piazza. I discover later he was first there and a bunch of kids on 50cc Gilera’s had pulled up beside him and he wasn’t sure what to do when they started to admire his lovely scooter.

Anyway I let him know that I’m on my way and the Lambretta starts on the third kick (not bad considering I hadn’t started it in 10 or 12 days as I was away).
As I get to the piazza I note that there are at least another 6 or 8 scooters already there and two cups of coffee (cappucino for those that are more cultured than I) it was time to saddle up!

The Culprit
Once the directions to Thurleigh are sorted everyone starts their scooters (17 in all now) and off we go, round the square (so Rob can take a couple of pictures) and down the embankment. As we reach the end of the embankment it happens, except nobody notices for another mile when we reach the Polhill Campus. We’ve lost one, in fact we’d lost two! Bugger!

A couple of us turn round, nip back and find a couple of the lads trying to start a scooter. Turns out its Kev from the Luton Lambretta Club who had come up to us today for the first time. Seems that the problem was that it was running fine and then after idling at the junction it flooded and died.

All was not lost however for as soon as the plug was changed it roared into life and we were off, then fifty yards later all was, once again, lost. The bugger had done it again!

With the arrival of Squirrel, there were now five or six of us trying to get this scooter going. Symptoms were, good spark, really stiff and shitty feeling throttle action, little if any attempt of scooter to spring into life!
So, out come the tools again. Changed the spark plug, no difference. Bump it, nope, no difference. What about air flow? Was there anything under the seat? Doh! Kev had only recently put a pair of waterproofs under the seat and that looked like it was blocking the scoop. Kicked it again, seemed to want to start, but then died again.

OK, air filter. Took off the elbow and filter and lo and behold it looked (in Squirrels words) like it had last “been used on Ben Bleedin’ Hur’s chariot”. I think that means its shagged!

To cut a long story short, we got to Thurleigh minus the air filter and elbow etc. but Kev did say when we got there that he did have to keep it at very high revs so it didn’t die on him.

The rest of the afternoon was spent replacing his throttle cable, with me snorting some two stroke up my left nostril (don’t ask, I was under the scooter at the time) and deciding that the best way to run it and get him home to Luton was to put the air filter assembly back on but just leave the filter itself out.

I hope it worked 🙂 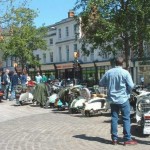 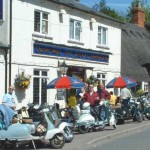 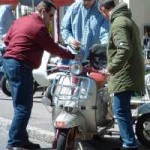